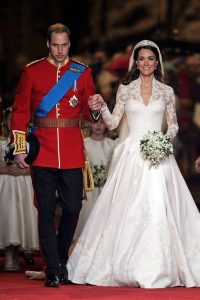 America and Great Britain share a common heritage. Even in the music, as we pointed out in last week’s blogpost. Despite so many similarities in the cultures, there are some pretty big difference between American weddings and Brit weddings.

Let’s look at differences in ceremonies

Americans tend to write their own wedding vows, but not in Great Britain. Most of the Brit weddings take place in Anglican (Church of England) churches, and they follow a strict script when it comes to the vows.

U.S. weddings feature more bridesmaids than in Britain. The Brits don’t have a ‘maid of honor’ but rather a ‘chief bridesmaid.’ And their bridesmaids get to sit during the ceremony while their American counterparts usually stand.

In contrast to American grooms, British grooms traditionally face away from the bride until she is deposited at the altar.

Let’s look at the difference in receptions

Thanks to wedding DJs like us, a new American tradition of a grand entrance for the happy couple was forged at receptions in recent decades. No such tradition developed on the other side of the pond.

This blog writes a lot about toasting and the need to never embarrass anyone. Not in Great Britain! Brit grooms are supposed to ROAST the groom, not TOAST him.

A roast pokes fun at the groom, where as a toast pays tribute. We like the American tradition better. After all, roasting is even more of an art form than toasting, and it can easily veer from funny to hurtful or even politically-incorrect.

The most famous roaster of the modern age was the late comedian, Don Rickles. We were going to post a video clip of him in action from yesteryear. But let’s face it, humor has changed. What was funny yesterday is considered offensive by some today, which is why toasting is much better than roasting.

One final distinction between Brit weddings and ours: the cake. In America, the sky is the limit in terms of the type and look and overall creativity of the cake. The creativity and artistry are off the map. But the poor Brits pretty much stick with … [drumroll!] … fruitcake.

Columbus Pro DJs is very happy to stick with American tradition, thank-you. We have some great music in mind to play for your grand entrance. But what are your ideas? Your wedding is about you and your American traditions, or even your own personal cultural traditions. Shoot us a quick message to check on our availability. And then the collaboration can start!